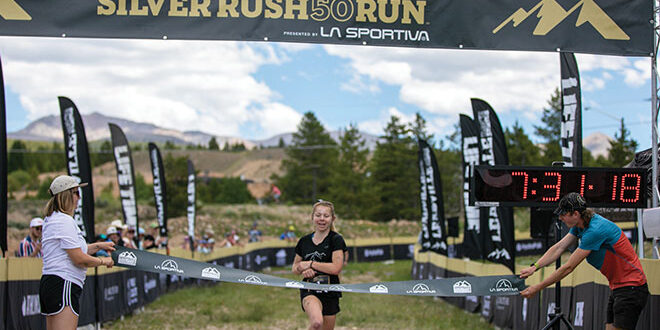 Herman first came to the Gunnison Valley as an alpine ski racer for Western Colorado University in 2016.

“I just knew I wanted to ski,” says Herman.

But, like most ski racers, a knee injury the summer after her freshman year sidelined Herman and had her looking elsewhere to remain active. Once rehabbed from her injury, Herman’s interest in ski racing started to wane and she found a new outlet.

“That’s when I turned my focus to trail running,” says Herman.

She split her time between the ski racing team and the trail running team at Western her sophomore year and then turned all her attention to trail running her final two years of college.

“I had to go get treatment for an eating disorder, so I had to put running on pause,” says Herman.

She came out of her treatment ready to jump back into trail running and started working with her coach David Roche, based out of Boulder. Herman jumped back into the racing fray in 2021 and after doing well in a couple of big races, she turned a corner at the Leadville Silver Rush both literally and figuratively.

Literally in that she took a wrong turn yet still won.

“I got lost near the end and actually added a mile,” says Herman.

Figuratively in that she realized she may be onto something big.

“I completely surprised myself at Leadville last year,“ says Herman, “And I realized that if I take care of body and listen to my coach, I could have a future in this sport.”

Coming into the race this year, Herman had some thoughts running through her mind. One was defending her title and the other was setting a course record as she was a little over five minutes shy of the record last year even with the wrong turn. But her coach reminded her of the pitfalls of such thoughts.

“I definitely had the course record on my mind,” says Herman. “But my coach encouraged me not to set my sights on a certain time.”

Then, when she showed up to pick up her bib for the race this year, the pressure started to mount. Upon arriving to her racer packet pick up, she was taken aside and handed the bib with the number one on it.

“I was like, oh my God, I’m definitely feeling the pressure a little bit,” says Herman.

Herman admits that pressure weighed on her for the first half of the race as she tried to find that delicate balance between leading the race but maintaining a sustainable pace.

“I was in a weird spot mentally the first half of the race but felt good physically,” says Herman.

The course is in an out-and-back format, so when Herman turned back at the 25-mile mark, she got a look at the other women in the race.

“I thought the other women were a lot closer to me than they actually were,” says Herman. “It was good though because it kept me motivated.”

Herman maintained her pace and stayed well ahead of her competition to shatter the course record by over 30 minutes with a time of seven hours and 31 minutes, over 50 minutes ahead of the woman who came in second place.

“It was definitely hard because running 50 miles is always hard, but I paced it pretty well,” says Herman.

Herman is taking the next few days off and then returns to training as she earned an automatic spot in the infamous Leadville 100-mile running race on August 20.