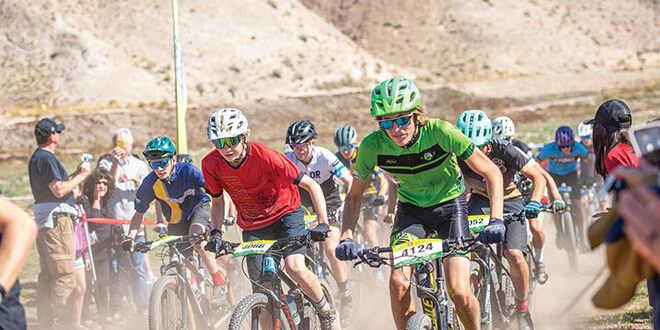 Close out season with league and individual titles

The Crested Butte Devo high school bike race team wrapped up the regular season with the Crystal league title and every rider on the team is headed to the state championships in Glenwood Springs on Saturday and Sunday, October 22-23.

With October Break pulling three of the teams’ athletes away, eight riders made the trip to the final race of the regular season, the Haymaker Classic in Eagle, on Saturday, October 8.

The course in Eagle has always been a bit tough for the Crested Butte team given its characteristics.

“Typically, we don’t do very well there, it’s more of a desert kind of course,” says coach Jenny Smith.

Finn Veit has been the points leader all season long in the JV class, yet it still came down to the last race of the regular season as he finished the day in second place to seal the JV regular season title.

“He had such an awesome race with a crazy sprint finish,” says Smith.

Varsity rider Lance Lakoski continues to gain momentum in the latter stages of the season. Lakoski had a rough start in the first two races of the season but posted a 10th place finish in the third race, only to be sidelined with COVID. He was finally cleared to return to racing and after being called up last to the start corral, Lakoski punched his way to a sixth-place finish in Eagle.

“He had a rocky start to the season but is pulling it together at the end and had such a good race,” says Smith.

Meanwhile, Sam Bullock was in the mix as well for the overall title in the sophomore class all season long but came into the final race of the season hampered by illness. He still lined up and battled through to finish the day in fifth place and in second place in the overall points standings.

While the Crested Butte Devo race team won three of the four races this season, some regulations regarding team participation had the overall team title a bit in flux but once the numbers were tallied, and rules enforced, Crested Butte edged out the team title by just 25 points for the first time in the history of the program.

The team is now back to full strength this week as they prepare for the state championships with every rider making the cut for the big show. One will be missing the races due to a previous family commitment, but the team will still have 11 riders rolling up to the start line with a shot at returning to the podium after placing third last year as a team.

“Everyone is riding super strong,” says Smith. “I think we go into it to just enjoy the event with no pressure and if we can get on the podium that would be great,” says Smith.